I was asked to take part in an exhibition of contemporary upholstery at the Geffrye Museum in London by the ever-wonderful Second Sitters and what an altogether wonderful thing it was. 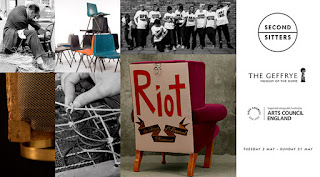 Anyone familiar with the Geffrye Museum in London's old furniture district of Shoreditch will know it's the perfect location for a show about upholstery - you walk through a long corridor of rooms displaying furniture throughout the ages until you reach the gallery space in which you'd expect to find a timeline of the history of upholstery with a great display of all the components of stuffed furniture and then a nice display of lovely contemporary upholstered chairs. 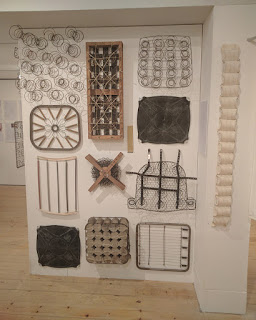 But it was nothing like that. Well the first bit was, the history of upholstery was excellently researched and the wonderful range of upholstery bits and pieces would be fascinating to anyone but as soon as you turned the corner to the 'contemporary upholstery' you were faced with the weirdest gathering of furniture made by the biggest bunch of nutters you'll ever see in your life. 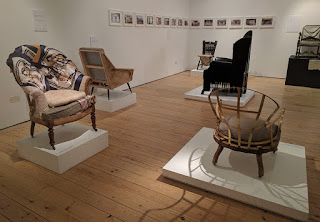 This is where Second Sitters are so strong - they are utterly uncompromising. The show included: whoopee cushion chairs that make various noises when you sit down, a hanging burnt armchair, a chair upholstered with only flotsam and jetsam, a chair half upholstered in Hermes scarves, a chair about Hiroshima, a chair with horses' hooves for legs, a pair of stools somehow wired into the walls and an armchair emblazoned with the word RIOT. These are chairs that make a POINT.


Don't get me wrong, these are not unlovely chairs, they are all beautifully upholstered and perfectly appointed. But this is not a furniture showroom, it's a showroom of ideas. And these ideas are not for the faint hearted. The show wasn't called Evolution to Revolution for nothing.


For my own part, I included 15 framed photographs of my guerilla upholstery bus stop chairs and two of my 'conjoint chairs'. 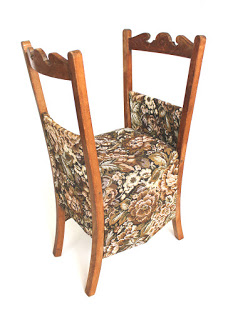 The Beast with two Backs 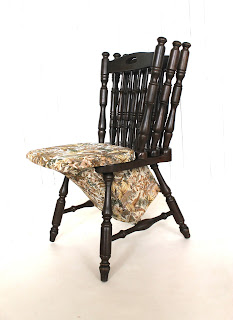 The Beast with Three Backs


The 'point' of these chairs is not exactly obvious, I know. They're experimental and slightly daft which is exactly how I like things. Like the bus stop chairs they're saved from landfill and using waste materials, particularly the tapestry fabrics which I love and that everybody still hates (they're coming back, you mark my words) but the 'point' has something to do with joining things together and joining people together - that's as far as I'm letting on, you'll have to fill the rest in yourselves.

Apparently some choice comments were overheard from people looking at these - one lady was convinced that the Beast with Two Backs was "for a baby, it's for a baby, yes that's what it is, it's for a baby" before quickly moving on. I love that many visitors probably don't come across this type of thing in art galleries, etc and among them may have been some bemused visitors but it was quite clear that people were well able to take away the idea that as well as doing their jobs, upholsterers might have a point to make too.

My favourite comment came from upholsterer and chair caner extraordinaire, Rachael South who whilst stood looking at my chairs asked me "have you got access to my nightmares?"

Because Second Sitters are thorough in how they " promote independent UK and international upholsterers through publications, exhibitions, collaborative working and education days" there were also lots of upholstery demonstrations, workshops, discussions and other events held during the three weeks. The Geffrye Museum were also very supportive, promoting products made by exhibitors (including mine) free of charge. And a host of volunteers came forward to help with invigilation, etc, so  the whole thing was very well supported and visited (see the World Upholsterers Map at the show) by those in the upholstery business. By that I guess I mean the REupholstery business as I don't think anyone from DFS would have got out alive.


The exhibition is over now and the world has gone back to normal - most of the exhibitors are making beautiful but 'normal' chairs again. But it DID happen and who knows, it might happen again. Maybe some forward thinking art or craft gallery might come forward to take the show elsewhere or maybe there'll be another, similar thing in the future. I will certainly keep experimenting with slightly daft/slightly worrying chair experiments and the world will keep turning and the world of upholstery will move slowly but surely on. It just won't be quite the same as it used to be.

Second Sitters we salute you.


Posted by Mick Sheridan Upholstery at 07:15