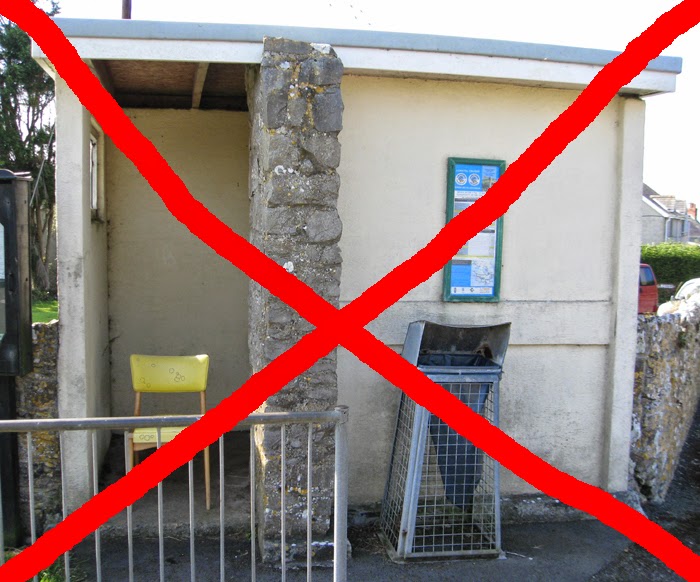 I dropped this yellow chair in a nicely colour-matched bus stop in the village of Castlemartin, just beyond the MOD firing range. I photographed the chair (thankfully I couldn’t get an angle to film myself in the gorilla outfit) and was just pulling away in the van when a scarlet-headed man came blistering towards me shouting,


“WHAT’S THAT CHAIR DOING THERE?”

‘Uh, oh’, I thought and slowly scrolled the window down.

“YOU CAN’T DUMP THAT THERE, I KNOW IT WAS YOU, I SAW YOU DO IT, I’VE GOT YOUR NUMBER AND I’M PHONING THE COUNCIL.” He was livid. Bright red, shaking and screaming.

I got out of the van.

“PUT IT BACK IN YOUR VAN.” he ordered as I stepped towards him, “YOU CANNOT DUMP IT THERE.”

I was calm. He was not. He was wanting to kill me. He was a good deal bigger than me in all aspects. I tried smiling but it didn’t help. I don’t have the type of face to placate angry people, I have the type of face that makes them think I’m going to have a fight with them. I’m not, I’ve never had any fights, but by all accounts, when confronted I look like I’m about to have one (which may be why I haven’t had any fights).

He backed off quickly shouting, “I’VE GOT YOUR NUMBER PLATE.” He stumbled in the road and we both looked down at his feet. He was wearing slippers. He was furious in slippers.

“It’s ok,” I said as calmly as possible, “Don’t be upset, I’m not trying to upset anyone, quite the opposite in fact. I’ve reupholstered the chair and brought it here so anyone waiting for a bus can sit down on it.”

He gave this no consideration, his mind was made up - I was doing wrong.

“It’s fly-tipping, that’s what it is, and I won’t let you dump it there.” He was now shouting less but getting redder and more resolute.

What to do next? I’ve often thought about what the police might have to say about all this, but had not thought through an altercation with a furious man in slippers. How could I explain? Suddenly a simple idea came to me.

“It’s an art project,” I offered, (It isn’t, but it seemed feasible as an explanation).

He lunged forward, planted his big glowing face right into mine and bellowed “YOU’RE AN ART PROJECT.”

I was beaten, that was now very clear. I exhaled slowly and deeply, picked up the chair and walked calmly back to the van. As I drove away I saw his big red head give me a small wobble of winning smugness.

“Fair enough,” I thought, “at least he’ll feel vindication for all his upset.” And I felt a little bad that he’d had to go through that.

Posted by Mick Sheridan Upholstery at 02:28