A 1940s armchair in a rather 1920s style, now covered in Sanderson Trilby Turtle (I kid you not). I think this should have had a feather cushion but the customer wanted a sturdy foam seat. I think it worked out pretty well in the end. 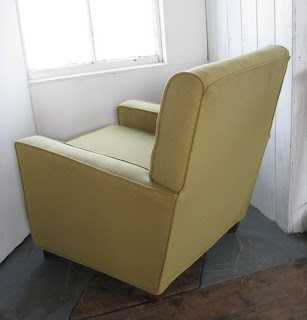 I love the angle on this chair, best seen in this side view. 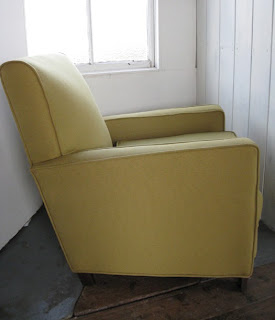 This was a commission - six metres of fabric on this, so it wasn't a cheap one, but as always with re-upholstery, well worth it. 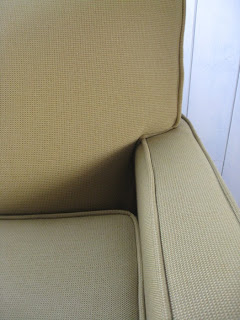 Posted by Mick Sheridan Upholstery at 10:39 No comments:

A pair of 1920s caned armchairs re-upholstered in Sanderson tweed. 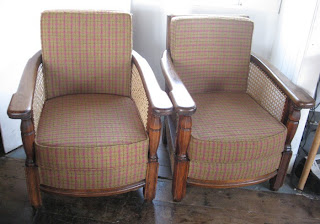 These chairs were in the house I grew up in and were originally upholstered by my dad. He was a trimmer in the car trade for Aston Martin, Vanden Plas and London Transport. His great claim to fame was that he upholstered the ejector seat in the James Bond Aston Martin. He also did re-upholstery from home and would make me stand around and pass him tools when I really wanted to be in my bedroom listening to The Smiths and generally being a whining teenager. The rest, of course, is history. 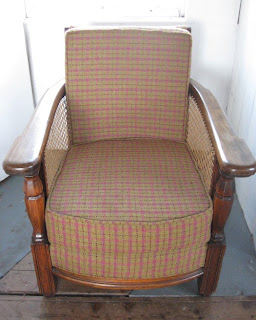 When my dad died a couple of years ago, I took these chairs and agreed to re-upholster them for my eldest sister - so here they are. The problem is that my brother always wanted them but had nowhere for them so my sister stepped in - I just hope he doesn't suddenly want them back... 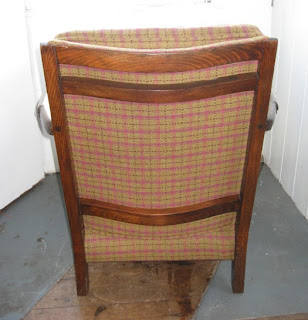 I loved the fabric she chose, Sanderson Highland Weave - Skye, is 100% wool so my favourite material to work with. It really took some time getting these small checks to line up I can tell you, at times it felt more like tailoring. 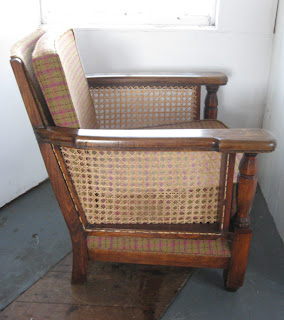 This seat had to be re-caned, (not my favourite job in the world), but the other had already been re-caned by my dad in the 1980s so it was nice to have his work next to mine.

Many thanks to my sister Carmel for stumping up the cash to have these done, it's a pleasure to see them in use again. Please don't tell my brother or my other sister though - there'll be a regular Sheridan bun-fight.
Posted by Mick Sheridan Upholstery at 07:07 2 comments: