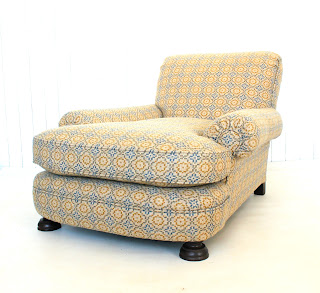 I'm calling this a club chair because of the shape but it's so low you won't find one like this in any gentleman's club full of stuffy old duffers, they wouldn't be able to sit down in it let alone get out of it again. 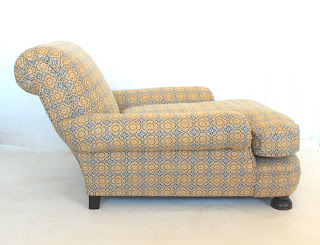 And I'm calling it extraordinary because I've never seen anything like it. I picked it up from the customer and was thinking it's so low and long with such a huge feather cushion it had to be a one-off and it turns out it was. Like so many chairs that come in for reupholstery there's a story behind it.

This chair was designed by and made for a close friend of the customer's family, the Irish designer and artist Mia Cranwill. She was a prolific exponent of the Irish Celtic Revival that was part of the Arts & Crafts movement and most famously made the Senate Casket which housed the signatures of the Irish Free State. Here it is 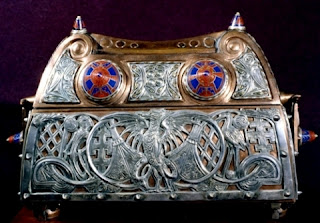 A supporter of the Irish Republican cause she is purported to have hidden guns in her studio in Dublin which was frequented by Republicans and known to them as the 'Joyous Haven'. She made things for all sorts of fashionable and influential people including Compton Mackenzie, George Bernard Shaw and the Irish Tenor John McCormack (who gets a mention because he was my dad's favourite).  She also designed the standards for the Irish Free State Army no less. Here's some more things she made 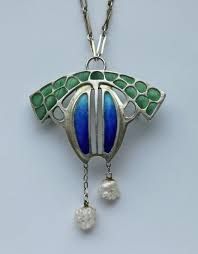 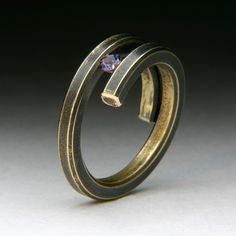 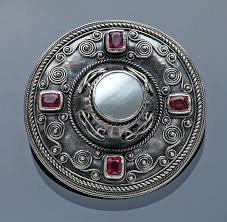 Apparently she was a very tall lady which accounts for the length of the chair but why it is so low remains a mystery. In any case this is a much loved family heirloom that gets lots of use and apparently seats three children at once.

Unfortunately I didn't find any Celtic Revival jewelry stuffed inside, the last upholsterer must have made off with that, but I did find plenty of evidence of its recent history... 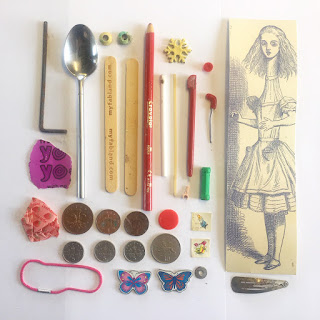 And long may that history continue.

Post Script - in response to this post here's an email from Hugh Glanville  to his daughter Kate (who now owns the chair) adding some lovely detail and corrections to the brief research I did on Mia Cranwill. Many thanks to Hugh for this insight.

There are just a few things that Mick Sheridan’s very interesting blog bring to my mind.

Mia did not only work in metal.  She also engraved book illustrations (e.g. for the Dolmen Press, see the National Library of Ireland catalogue).  We have a couple of examples and also a book of translations of ancient Irish epics with a cover in moulded leather done by Mia.  (She taught me how to model designs in leather after soaking it, and I once still had some of her leather working tools.) She knew all the literary figures of her time, such as W.B.Yeats.  Mia, like Yeats, was inclined to Theosophy.

You have a ring Mia made as an engagement ring for my mother - who disliked it.  We used to have a bronze medal she had won as a student – now with Dun Laoghaire College of Art.
Possibly the most interesting work of hers were miniatures of the Ardagh Chalice and the Cross of Cong (the ancient originals having a pride place in the National Museum) that she made for the chapel of Titania’s Palace (the doll’s house made by the Dublin furniture designer Hicks, then furnished by contributions from many noted Irish artists, now alas lost to Denmark).

The blog says she designed “the standards for the Free State Army, no less”.  These were the tops for flag poles carried by the Irish Army – I recall seeing them in use for a procession at the Dublin Horse Show.  Mia had not been responsible for their manufacture and as I recall she was disgusted at how her design had been rendered.  In fact she gave me the copy she had been given – having been using it as a doorstop.  I don’t know what became of it.

The blog also reports that “she is purported to have hidden guns in her studio in Dublin which was frequented by Republicans” but I believe this is a mistake.  What Mia told me was that her family had hidden some guns for the Irish Volunteers, presumably after these had been brought in through Howth in 1914.  She said she remembered some important official from Dublin Castle (I think it was the Ulster King of Arms) being at her parents’ home for tea and how horrified she had been to see guns that had been pushed down the back of the couch glinting every time he leant forward to take a sandwich!

Mia’s father was a great friend of my father’s father.  They were both members of the IrishProtestant Home Rule Association.  This had been formed in support of Gladstone’s Home Rule Bill at a time when the latter was being strongly opposed by Irish unionists – particularly among the Protestants in Ulster – under the slogan “Home Rule means Rome rule!”.  This latter movement (under Carson and others and initially supported by the Conservative Party, “playing the Orange card” as Churchill’s father advocated) went on to form the Ulster Volunteers in order to oppose Home Rule by force of arms (“Ulster will fight and Ulster will be right !”), importing arms from Germany (“the greatest Protestant nation on earth”).  After the British Army in Ireland made it clear that it was not prepared to fight against the Ulster Volunteers (the “Curragh Mutiny”) the Irish Volunteers were formed to fight in defense of the implementation Home Rule against the Ulster Volunteers - if the British Army would not do so.  The Irish Volunteers also imported arms from Germany, some of which Mia may have seen.

My grandfather seems to have dropped out by then, but continued to support Home Rule; he is said not to have spoken to his brother for twenty years, the two having taken up opposing sides on Home Rule.  I am not sure whether he would have called himself “a Republican” – probably not.


This chair now available to bus travellers on the A40 at Llansantffraed. 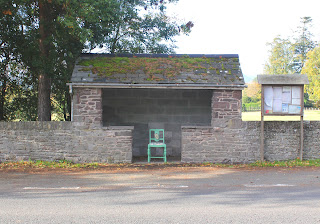 I painted the chair in some green paint I was given and went looking for some matching fabric in the scrap bag. I can't remember where this fabric came from but it looks kinda William Morris like and after stitching some pieces together I had a bird left over that became the ridiculous cushion on the back. I just drilled a hole and tied it like a button. 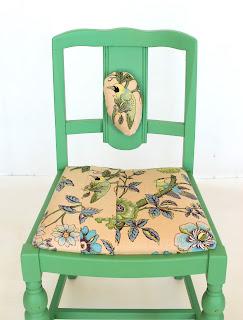 Daft experiments can lead to genuinely good ideas. This is daft but the idea of attaching a back cushion in this way is a good one so you never know until you try do you?

Do you do any daft experiments?

Why not? What are you doing instead?

Oh I see. Well that sounds more important. You'd better get on with that straight away after you've finished looking at the internet. 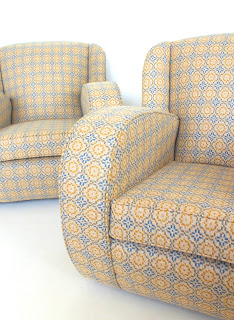 Great shape on these don't you think? 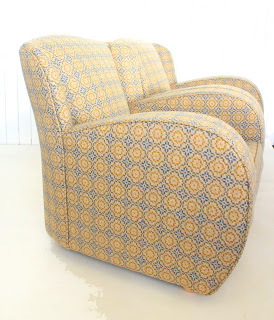 You could probably pick up something like these for a couple of hundred quid then bring them to me, spend another £1500 or so and you can have your own pair. What are you waiting for? 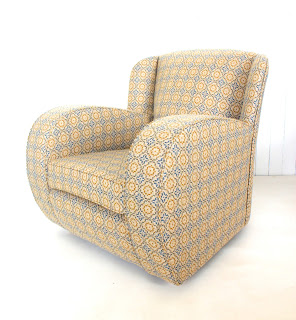